A Change That Offers No Hope

“The government consists of a gang of men exactly like you and me. They have, taking one with another, no special talent for the business of government; they have only a talent for getting and holding office. Their principle device to that end is to search out groups who pant and pine for something they can’t get and to promise to give it to them.” – H.L. Mencken

All of these opinions and theory's of why Obama won and Romney lost are getting us nowhere. The whole and only reason why Romney lost the election, clearly, is massive voter fraud.

The evidence is ubiquitous.
Incidents of voter fraud are like cockroaches. If you see one, you know there are thousands more behind the baseboards. And, so far, there is evidence of massive voter fraud nationwide.

There's the Facebooker who bragged that he's already voted 5 times for Obama and plans on voting more. 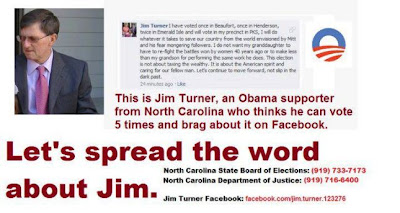 Then, the thousands of votes cast over and above the number of actual registered voters in several states (states which, coincidentally, did not enact a photo ID requirement to register), and, curiously, mostly for Obama.

Entire precincts that, strangely, had no votes cast for Romney at all!

Not to mention those polling places that had armed Black Panthers standing at the entrances intimidating voters.

These cannot be mere coincidences.
Unfortunately, there is little recourse. There is  little chance the votes will ever be recounted.


There is no chance the system will ever be fixed so long as the election boards are controlled by a government that is corrupt from the President all the way down to the local dogcatcher.

So far, you can still feel free to disagree with me in this country, but one wonders how long we will still enjoy that freedom, and the others freedoms we currently take for granted, such as freedom of religion (not from religion) and the right to bear arms.

Enjoy your rights while you still have them.

If the unscrupulous can already control the election outcome, there's no stopping them from total control of the electorate
.
Posted by Mark at 9:59:00 AM

The whole and only reason why Romney lost the election, clearly, is massive voter fraud.

Clearly. All the polls that called the election nearly exactly right factored in the exact amount of fraudulent votes in each state? Or the Democrats cheated just enough to match the pre-election polls? Over three million fraudulent votes?

How else could a Muslim be elected?

I voted for Obama four times myself.

The article linked to doesn't say that at all.

I was just at a funeral and I reminded the heirs to report to the registrar ASAP their father's death so as not to have his name on the rolls lest one of them vote in his name. [snark]

Entire precincts that, strangely, had no votes cast for Romney at all!

The man was an official poll watcher. Videos show him opening the door for people. He appears to be armed with a handful of paper.

There is no proof that any of this is true or that it had any effect on any election outcome.

Massive voter fraud would require a conspiracy.
Surely a conspiracy on that level would have a few leaks but you offer nothing but the ravings of a loser.

...but that Black Panther in Philly intimidating all those black folk who were going to vote for Romney, well you may have something there.

Do you realize how foolish you are being?

"The whole and only reason why Romney lost the election, clearly, is massive voter fraud."

Actually, Mark, the real reason is that the incredibly stupid outnumbered the sane.

Mark
I don't borrow, cut and paste, or otherwise echo other Conservative blogs and talk show hosts. I sometimes refer to other opinion pieces, but the opinions presented herein are my own. Just because some talk show hosts or bloggers sometimes say the same things I do, any apparent similarities between myself and other commentators is purely coincidental.

1. Always expect the worst from a liberal and you will never be surprised.

2. Never try to reason with a liberal. They disregard any evidence that conflicts with their beliefs.

3. You can always tell what liberals are up to by what they accuse you of doing.

5. The only standards liberals have are double standards.

7. Whenever you don't understand a liberal's motives, just look for the money.

8. Liberals cannot be embarrassed. They lack the gene to blush.

10. Liberals get older, but they never get smarter.

11. There are no honest liberals. If they were honest -- especially to themselves -- they would not be liberal.

13. Liberals have an inflated sense of self-worth. They are like house flies that criticize the air-worthiness of a Stealth fighter. (Sarah, Palin, George W. Bush, ad infinitum are morons.)

14. Liberals lack a sixth sense that is standard equipment in conservatives -- common sense.

16. There are only two types of liberals -- the deceivers and the deceived.

17. Every time liberals get on their high horse, they get bucked off.

18. Liberal programs are so wonderful that they have to be forced on people.

19. Liberals always choke on their own medicine.

20. When given a moral choice, liberals always come down on the wrong side of the fence.

21. The only way liberals can build themselves up is by tearing others down.

22. Liberals not only refuse to admit their mistakes, they refuse to learn from them.

24. Liberals are incapable of attacking the message, so they always attack the messenger.

25. Liberal diversity is only skin deep.